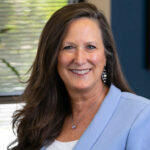 As the president and CEO of a community foundation, being more effective was bigger than just her performance—the impact could be felt by people who would otherwise fall through the cracks. After following the advice she received during one of the weekly BusinessAccelerator calls, she launched a comprehensive ad campaign that was wildly successful, driving revenues up 41%, while enabling her organization to put more than $2 million back into the community.